What is happening in Paris in February?

The news of the month with movies, shows, concerts...

February announces the beginning of the winter school vacations... After the month of January when we gently recovered from the Christmas holidays, where we gorged ourselves with galettes des rois and where we feel more like staying at home, in February, we put our nose outside!

And also in February in Paris, we advise you :

A real favorite is "Marche et démarche - Histoire de la chaussure" at the Musée des Arts décoratifs. At the Picasso Museum, "Picasso, Tableaux Magiques" which ends on February 23 and which is the opportunity for children to discover the world of Picasso. At the Cité des Sciences, "Espions" is ideal with teenagers, it is a hit! At the Palais de la Découverte, we loved the exhibition "De l'amour", which approaches this theme from all angles, scientific and artistic. An exhibition that should do them good! At the Musée de l'Homme, "Je mange donc je suis" (I eat therefore I am) to learn everything about the biological, cultural and ecological aspects of our food (ideal from 10 years old). We can't wait for February 23rd, at the Cité des Lumière "Monet, Chagall, Renoir? from impressionism to modernity".

The shows we recommend this month

With teensWithout hesitation, "Les Franglaises" at Bobino, a jubilant and crazy show. "Le Porteur d'Histoire", at the Béliers Parisiens theater, an extraordinary text! Still and again "Edmond", a dazzling play at the Palais Royal theater (1st). A great classic revisited "Cyrano de Bergerac" at the Théâtre Funambule.
With the 7/12 years oldthe indisputable "Apzurde" at the Treviso theater ! "Ados" at the Grand Point Virgule theater, the show that speaks to pre-teens. And finally, "Quasimodo ? Le Bossu de Notre-Dame", at the Lucernaire theater, a beautiful adaptation of Victor Hugo's work.
With toddlers (from 6 months to 6 years old), no less than 10 plays, such as "The Princess with the Little Pea in her Head" (from 3 years old), "Cinderella" (from 3 years old), "Help, Prince Aubert has disappeared" (from 4 years old) or "The Flight of the Little Bird" (from 6 months old).

"The Opera Locos" at the Théâtre Libre, the great opera arias revisited by 5 singers or "Ghost, the musical", the musical in French inspired by the cult film. Funny Girl, the musical" at the Marigny theater (until March 7 only)

Cirque Bormann: "Juracirque", a family circus very close to its audience (all year round in Paris). With Cirque Paname: "Le Monde de Jalèya", an event show, a hybrid show of a new kind. And until March 15, a great classic with the Winter Circus Bouglione and its show ?Défi!


And also
IF THE WEATHER IS NICE
PLEASE
THE EVENING
HOLIDAY SPECIAL
suggestions
Research in progress ... 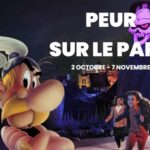