The favorite outing of children

If the weather is good...to the zoological parks. There are two in Paris: the Zoological Park of Paris (formerly Zoo de Vincennes) in the 12th and 13th centuries. the menagerie of Garden of plants...in the fifth. On Saturday or Sunday, direction the farm of Parisideal with small (and it's free). Dairy donkey breeding in the 94...a really nice place with kids. For those who live in east of Paris, Attilly Wood Zoo. will make the youngest happy. In rainy weather or if it's chilly, aquariums are a great idea for family outings on weekends, Wednesdays or during school holidays.

Zoological and menagerie parks in and around Paris

It's a popular outing for parents, but especially for children. A walk that allows them to get some fresh airto stretch out and revel. Zoos and menageries also have an educational and pedagogical role : discovering animals, learn to observe thems, respect them and learn more about their way of life, their diet, their habitat, their habits... Zoological parks have an even more important function: to conserve animal species and protect them, to optimize animal reproduction... Many species have been saved thanks to the action of zoological parks.

The great Gallery of Evolution">

The great Gallery of Evolution

The menagerie, zoo of the Jardin des Plantes">

The menagerie, zoo of the Jardin des Plantes

Aquariums in Paris and its suburbs

❤ Reduced rates at the Aquarium de Paris (up to -32% discount)

The Aquarium of Paris Cinéaqua">

The Aquarium of Paris Cinéaqua

Meeting farm animals, getting back in touch with nature and getting away from our urban environment... This is what these farms near Paris allow you to do. Some of them offer of animationsThe children are encouraged to get close to the animals, toattend feeding or attend a workshoplike baking bread, for example. Admission to some farms is free. This is the case of the farm in Paris.

The farm of Paris">

The farm of Paris 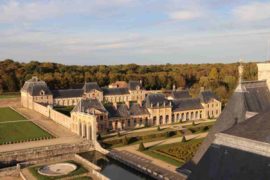 Outings and activities in Île-de-France

Amusement parks in Paris and in Île-de-France

The most beautiful castles in Île-de-France

Activities and outings in Paris (and around Paris) for less than 10€.

The most beautiful parks and gardens in Paris

Ideas for outings to the East of Paris