Home > Past events > Neanderthal the exhibition

Neanderthal, the exhibition on our ancestors, considered today as full-fledged humans

Neanderthal Expo at the Museum of Man offers a very successful insight into Neanderthal man who lived about 350.000 years and that disappeared mysteriously 30,000 years ago. This exhibition presents the daily life of this human speciesNeanderthal, a major figure in the human adventure, was for a long time considered as a primitive being. The time when Neanderthal was described as a thick brute, a distant inferior cousin of the soulless human, is definitely over. It is now recognized as a full-fledged human being. Neanderthal man has bequeathed us a small part of his genetic heritage (between 1 and 4 %) testifying to occasional crossbreeding some 100,000 years ago in the Near East. In addition to the presentation of our distant ancestors, the exhibition does not fail to ask us about our own destiny in the face of environmental change.

The exhibition presents more than 260 objects (including real cranial fossils of Neanderthals), very educational multimedia devices, manipulations accessible to children from 7 years old. The course of the expo is divided into 3 themes: housing in the section entitled "The time of a day", morphology and behaviors during the passage named "The time of a life", then the exhibition tries to  put this species in perspective with Homo Sapiens in the part entitled "The time of a species". In the end, the exhibition allows you to discover  the "typical day" of a man nearly 400 000 years ago, his environment, his life habits, his way of eating and dressing? 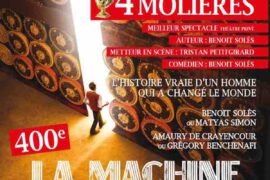